To the overview of cleaning systems

The LCT oil separator is a waste water treatment plant in the form of a basin in whichOils be deposited by slowly floating several plate packs. There is therefore a submersible partition in front of the drain, under which the oil-free waste water must pass.

This enables a continuous cleaning performance in the bypass stream, of a maximum of 20 mg residual content.

For light oil separations, smaller quantities, a windscreen skimmer system can be mounted directly in our washing systems, which then removes the oil film from the water surface by means of a large disc wheel when the washing system is at a standstill.

The oil carried along runs against a rubber lip and thus via a drainage channel into a collecting container.

To the LCT online shop

Our product range contains a large number of high-quality products for a wide variety of requirements.

You can easily download our LCT safety data sheets here with your customer number and e-mail address. 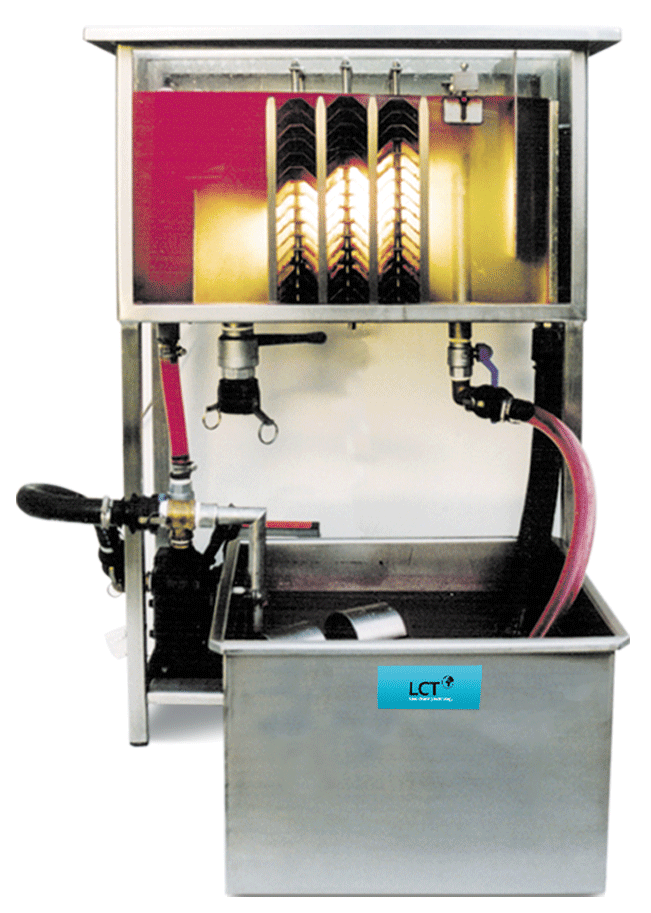 The LCT DPS system is a plate phase separator for the static separation of two liquid phases which differ in their density by min. 5% (e.g. cooling lubricant emulsion and hydraulic oil). Using gravity (sinking of the heavy phase) and coalescence (convergence of the droplets), the light phase is made to float as it passes through the unit and is continuously discharged.

Plate phase separators are being used more and more frequently due to increasing demands on the degree of purity of industrial liquids, e.g. for separating mineral oils from waste water, emulsions and degreasing baths. They can be operated with very low operating costs and are universally applicable.

DPS systems are made of stainless steel and are therefore also suitable for hot and aggressive liquids (pH 3.5 -14, Tmax=90° C).

With automatic level monitoring, they are designed for unattended operation and comply with the regulations of the Water Resources Act (WHG § 19). If required, they are available thermally insulated or heated.

To the shop
Technical information
Back to the overview

We would be happy to visit you on site with our LCT mobile on wheels to give you a practical demonstration of our products..

You are welcome to send us your soiled or residue-laden production parts and we will find the right cleaner or cleaning process for your application.

In our technical centre, we can simulate all application processes, from simple dipping to spraying to ultrasound or high-pressure processes.

Please fill in the adjacent fields or call us. You will find our contact persons at the bottom of this page.

Please send me further information by e-mail on the following topics: